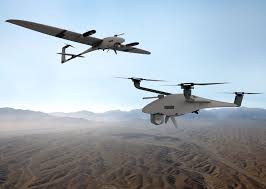 In its Vector configuration, the aircraft has two fixed wings and a tail attached to its glass fiber/Kevlar body. Two propellers on the wings – along with one on the tail – sit horizontally on take-off and landing, allowing the drone to rise and fall like a helicopter. Once it's time to cruise, however, those props rotate down to sit vertically, pulling the Vector forward and allowing the wings to provide lift.

In its Scorpion configuration, the wings and tail are pulled off and replaced with three arms, each one with a hard-mounted horizontal propeller at the end. The drone is then flown like a traditional multicopter – not as fast or efficient in forward flight, but without the added weight of the wings or complexity of the tilting props as it's hovering and darting about.

When flying forward as the Vector, the aircraft has a top speed of 25 meters per second (90 km/h or 56 mph) and a flight time of up to two hours per charge of its four lithium-ion batteries. As the Scorpion, those figures drop to a top speed of 15 m/s (54 km/h or 34 mph) and a maximum flight time of 45 minutes. Because the batteries are heated, they keep working at ambient temperatures down to -20 ºC (-4 ºF).

In either configuration, the drone can fly autonomously or by remote control, with an AES-encrypted mesh IP link transmitting video from a detachable gimbal-mounted nose camera up to a range of over 15 km (9 miles). That link also allows for real-time remote control over the same distance.