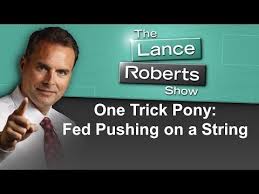 "In short, the proximity of interest rates to the ELB (Effective Lower Bound) has become the preeminent monetary policy challenge of our time, tainting all manner of issues with ELB risk and imbuing many old challenges with greater significance.

"Perhaps it is time to retire the term 'unconventional' when referring to tools that were used in the crisis. We know that tools like these are likely to be needed in some form in future ELB spells, which we hope will be rare."

After a decade of zero interest rates and floods of liquidity by the Fed into the financial markets, it is not surprising the initial "Pavlovian" response to those comments was to push asset prices higher.

However, as I covered in my previous article in more detail, such an assumption may be a mistake as there is a rising probability the effectiveness of QE will be much less than during the last recessionary cycle. I also suggested that such actions will drive the 10-year interest rate to ZERO.