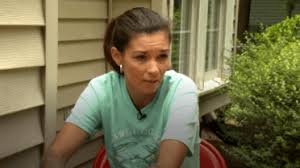 Jamie Rathburn of Simpsonville, S.C., reached her limit after her son endured physical and verbal bullying throughout the year at Greenbrier Elementary School.

Rathburn said she lost her "cool card" when the school administrators told her they had separated her son from the other students in order to protect him. The mother added that teachers were mandated to follow her son everywhere he went — including during recess and lunch.

"I don't regret standing up for my child one bit," said Rathburn to CNN. "I regret the way I did it: I walked right in that school, told those children that bullying wasn't OK. If they wanted to continue then I needed to talk to their mamas because the school wasn't doing anything. I'm not right in my actions, but I'm right in standing up for my son."

According to Rathburn, she and the school had multiple meetings about the bullying situation, but nothing changed for her son. She also kept a running log of the bullying incidents, which she said included her son being kicked, shoved, hit with a computer and forcibly jerked down a slide. She also claimed that he was called "gay" and "stupid," and when he reported it he was told to just "ignore it."