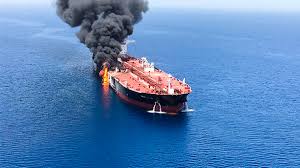 Iran has denied it had anything to do with Thursday's explosions and fires aboard the tankers Front Altair and Kokuka Courageous, which were steaming about 10 nautical miles from each other and issued distress calls less than an hour apart. Their crews abandoned the vessels, and all 44 people on board were recovered without serious injury.

On Friday morning, President Trump referenced the video during an interview with Fox & Friends and said, "Iran did do it, and you know they did it because you saw the boat."

Calling Iran "a nation of terror," Trump did not discuss whether the U.S. plans to take action in response, saying only, "We'll see what happens."

"We want to get them back to the table if they want to go back," he said. "I'm ready when they are, whenever they're ready, it's OK. In the meantime, I'm in no rush."

Iranian Foreign Minister Mohammad Javad Zarif has rejected the U.S. accusations, tweeting that the Trump administration "immediately jumped to make allegations against Iran [without] a shred of factual or circumstantial evidence."