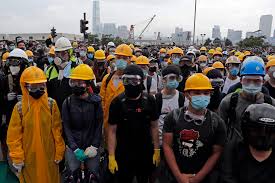 WeChat was gone. So was Alipay and the shopping app Taobao. She then installed a virtual private network on her smartphone to use with the secure messaging app Telegram in an attempt to stay hidden from cyber-monitors.

HONG KONG - The moment the 25-year-old protester got home from demonstrations that turned violent - tear gas still stinging her eyes - she knew what she had to do: delete all of her Chinese phone apps.

WeChat was gone. So was Alipay and the shopping app Taobao. She then installed a virtual private network on her smartphone to use with the secure messaging app Telegram in an attempt to stay hidden from cyber-monitors.

"I'm just doing anything" to stay ahead of police surveillance and hide her identity, said the protester. She asked to be referred only by her first name, Alexa, to avoid drawing the attention of authorities amid the most serious groundswell against Chinese-directed rule in Hong Kong since 2014.

Protests that expanded over the past week against a bill allowing extraditions to mainland China were marked by something unprecedented: A coordinated effort by demonstrators to leave no trace for authorities and their enhanced tracking systems.

Protesters used only secure digital messaging apps such as Telegram, and otherwise went completely analogue in their movements: buying single ride subway tickets instead of prepaid stored value cards, forgoing credit cards and mobile payments in favor of cash, and taking no selfies or photos of the chaos.

They wore face masks to obscure themselves from CCTVs and in fear of facial recognition software, and bought fresh pay-as-you-go SIM cards.

And, unlike the pro-democracy movement in 2014, the latest demonstrations also have remained intentionally leaderless in another attempt to frustrate police, who have used tear gas and rubber bullets against the crowds.