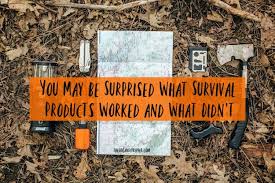 When I joined several ladies to take a survival course in Croatia back in May, we all brought the gear we felt we would need if a sudden Zombie Apocalypse arose and we had to get back home.

Some of that gear was fantastic. Some of it was terrible. And you might be surprised at what worked and what didn't.

Now, for the products I didn't like, I'm not going to name names and bash them. Simply because they didn't work for us doesn't mean they're 100% garbage. I'll just explain what I disliked about them and you can decide for yourself if that's a problem you'd have also. You also have to consider that we were using this gear in a specific set of circumstances and your circumstances might be different.

As well, you may have far more experience than I and using these things might be a piece of cake. This article probably isn't for you – it's probably more for folks who aren't big-time outdoor survival gurus.

I have carried around a Sawyer Mini for years and assumed that it would work well. I have used it when hiking and drinking water from a clear rushing stream. It worked just fine.

But on this trip, I used it to drink dirty puddle water and here I am, living to tell the tale. Did it taste like Evian water from the south shore of Lake Geneva, Switzerland? No, of course not. It was far from that rushing mountain stream water. But I lived and now I feel far more confident using my Sawyer Mini in less than desirable situations. I have felt worse drinking tap water in certain cities than I did drinking my filtered puddle water.  I had absolutely no negative effects from this and that water was muddy!

There are a million different tiny portable camp stoves out there in Prepperland. The one we were using was a metal stove that packed flat and assembled quickly. That was the easy part.

9 Things To Buy Every Time You Go To The Store

9 Things to Buy Every Time You Go to the Store