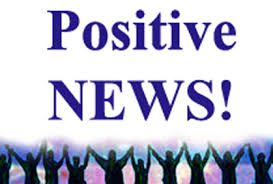 The world is often a bummer, but a whole ecosystem of podcasts and Facebook pages have sprung up to assure you that things are actually great.

Scroll below any news network's tweet about an act of human kindness or survival and you'll find the grateful replies: "Finally, some good news for a change," and "We need more stories like this!" and "Faith in humanity restored!" These enthusiasts are the reason a video of a police officer knotting a teenager's tie on the street outside a high school graduation ceremony can rack up 41,000 faves in two days. It would seem that the American news consumer is at all times hovering perilously close to a freefall of catastrophic misanthropy, only yanked back to safety by two paragraphs on a charitable recycling project or a video of a dad who beatboxes with his baby. These remarks indicate a belief that the news is overwhelmingly and indeed unnecessarily negative, and we need an antidote to its poison.

Enter "positive news" — an upbeat subsection of the human-interest story, a genre comprised of podcasts, news aggregators, and some very popular Facebook pages. The Good News Network, an online newspaper that has 585,000 likes on Facebook, was created in 1997 by founder Geri Weis-Corbley "because the media was failing to report the positive news." GNN says its stories are "inspiring" their readers, though we are left to imagine just what they are being inspired to do. A typical GNN front page might contain stories about an animal rescue, an anecdote about environmental preservation, a homeless person experiencing a windfall, or a child who started his own business.

Positive news is categorized not just by content but by framing and prominence — it is not simply that a nice thing happened, but said nice thing gives us hope for the very future of humanity that we are elsewhere denied. And this, to seekers of positive news, is exactly the point. The media could present stories in a more uplifting fashion, but instead wants to titillate and frighten us. This is somewhat true. You don't have to be a particularly savvy reader to know when you're being baited. But for the positive news consumer the issue is not a melodramatic headline here or there. Rather, the positive news lover believes that straight news isn't just negative, but essentially fake, and positive news does more than make a reader feel good, it delivers a fundamental truth. GNN's website tells us, "Thomas Jefferson said the job of journalists was to portray accurately what was happening in society," and the site exists to compensate for their failure. Jefferson also wrote that "that the man who never looks into a newspaper is better informed than he who reads them," but it's best not to let the Sage of Monticello clutter the "About" page with anti-literacy rants.

The Good News Podcast, produced by Cards Against Humanity, advertises itself as a salve for the news-poisoned, a listening experience that will "make each day more bearable." Each episode is roughly four minutes long, which is almost unbearably cute. For reference, my favorite podcast is two guys spending roughly the length of a movie discussing that movie, so my tolerance may be unusually high. One two-minute episode, "Good News About Animals," features 30 seconds on the doubling of Nepal's tiger population. The segment assumes the listener's awareness of endangered species but avoids any "negative" references to the sixth extinction. After all, it's tough to get into the drought-shriveled weeds in two minutes.

Boy, 12, who was accepted to MENSA at age three is set to make history as the --