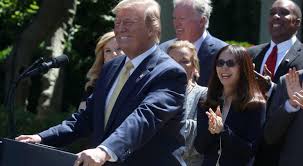 President Trump isn't much of an outdoorsman, aside from golf.

But maybe more than any president since Teddy Roosevelt, he understands the importance of others getting outside to boat, hunt, fish, shoot, and hike and their demands for access to federal lands and waterways.

"The president fundamentally gets that hunters and anglers are the true conservationists in our society. He understands that history and that we need to act in efforts to expand hunting and fishing while at the same time being respectful of private land rights, respectful of state law," added Bernhardt.

It's great to be in #Ohio today announcing our plans to significantly expand access and opportunities for #hunting and #fishing in this country! I had a fantastic time with scouts from Perrysburg Troop 167 at Ottawa National Wildlife Refuge to kick things off! @USFWS @boyscouts pic.twitter.com/95CQByILMu

The campaign to open access to the outdoors is a personal one for Bernhardt. In an interview, he said that living next to federal land as a kid in western Colorado helped shaped his life.

"Having those opportunities to succeed and fail made me more confident and made me more willing to accept challenges," said Bernhardt. "If I lived somewhere where my parents had to drive 300 miles for me to hunt or fish, it wouldn't have happened at all, though that might have been a lot better for my grades."

When he had young children in his first tour at Interior under former President George W. Bush, then-Secretary Dirk Kempthorne advised him to get a boat.