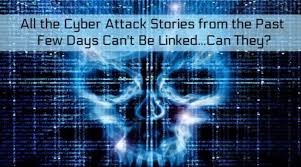 A very important skill for anyone who hopes to be in the know is the ability to put together seemingly unrelated stories for consideration.

Over the past few days, stories about grid incursions, Russians, cyber attacks, and technological failures seemed to be at the top of the headlines. A massive cyber attack could happen far more easily than most people realize.

The good folks over in Prep Club have been posting a lot of interesting links this weekend. Let's take a peek at each one. All these stories can't be linked…can they?

The US Is Hacking Russia's Grid

On Saturday, the New York Times reported (rather irresponsibly in my opinion) that the United States is escalating their "digital incursions into Russia's electric power grid in a warning to President Vladimir V. Putin" according to nameless current and former government officials.

Of course, this kind of stuff has been going on for a while. A friend of mine with a military intel background said it's similar to how we have nukes so that other people with nukes won't nuke us.

But the NYT story goes far beyond the mutually assured destruction theory.

The American strategy has shifted more toward offense, officials say, with the placement of potentially crippling malware inside the Russian system at a depth and with an aggressiveness that had never been tried before. It is intended partly as a warning, and partly to be poised to conduct cyberstrikes if a major conflict broke out between Washington and Moscow…

…the action inside the Russian electric grid appears to have been conducted under little-noticed new legal authorities, slipped into the military authorization bill passed by Congress last summer. The measure approved the routine conduct of "clandestine military activity" in cyberspace, to "deter, safeguard or defend against attacks or malicious cyberactivities against the United States."

Under the law, those actions can now be authorized by the defense secretary without special presidential approval.