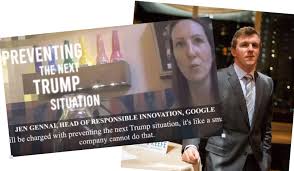 (Natural News) In the age of POTUS Donald Trump, the so-called "mainstream media" obsesses over every tweet, every word, every statement, and every action looking to find some angle, some new way to attack him.

When they believe they find a 'good one' — like falsely claiming he preferred the white supremacists in Charlottesville, Va. because, you know, he's such a racist and a bigot — they cover it and then repeat it ad nauseum.

The "Russian collusion" hoax is another classic example. For two years, the Washington establishment media served as the Democrat Party's propaganda wing parroting the lie that the president "colluded" with Moscow to "steal the election" from Hillary Clinton. They also promoted the fantasy that special counsel Robert Mueller was always just a few weeks away from 'exposing our criminal president.'

But when real scandal happens, all we get from these lamestream losers is silence, especially if the scandal involves Left-wing ideological soulmates.

Project Veritas' bombshell revelations this week about how Google has been working since 2016 to censor pro-Trump voices and content in order to prevent his reelection would have been front-page, top-of-the-fold news in The New York Times, the Washington Post, USA Today, the L.A. Times, and on all the Democrat-aligned news websites and cable TV networks for weeks on end — if only the big tech behemoth was run by conservative Trump supporters who donate to Republicans, and the company was working to defeat a Democratic presidential candidate or incumbent.

But since Google is no different from the rest of Silicon Valley's technology giants — owned and operated by true fascists and Marxists — the allied 'mainstream' press has ignored the allegations.

That means the same press that screamed "Collusion!" and "Obstruction!" for years is now colluding with Google to suppress what some legal experts are calling real election meddling.

And again, these are bombshell admissions from top Google executives that Project Veritas' undercover journalists managed to get on video.

IT DOESN'T EVEN MATTER!

It's Not Just Netflix That's The Problem -- It Gets A Lot Worse!

Journalism's New Propaganda Tool: Using 'Confirmed' to Mean its Opposite

'It could have been a John Kelly'

Democrats PANICKING Over Riots Get Saved By Media, Latest Smear Of Trump So INSANE...