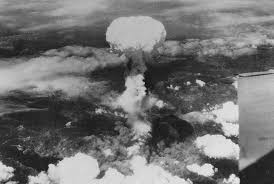 Half of the responders to an innovative new survey of 3,000 Americans conducted by the Bulletin of the Atomic Scientists and the British research firm YouGov reported that they would support a nuclear strike against North Korea if it tested a long-range missile capable of reaching the continental United States. A third said they'd actually prefer such a strike over other hypothetical responses.

"For example, while 'only' 33 percent of the US public prefer a US preventive nuclear strike that would kill 15,000 North Koreans, 50 percent approve," the report reads.

The study found little change in preference for a preemptive nuclear strike whether the hypothetical scenario offered to respondents entailed the death of 15,000 North Korean civilians or one million. Preferences for a preemptive strike only dropped when the hypothetical scenario reduced the probability of success (meaning elimination of North Korea's nuclear retaliatory capabilities) was reduced from ninety to fifty percent.

The survey found a large knowledge deficit in responders regarding nuclear weapons, with a majority reporting an unrealistic amount of confidence in both the US military's ability to eliminate all of North Korea's nuclear arsenal in a preemptive strike and in its ability to shoot down North Korean missiles using current missile defense systems. This inaccurate perspective was significantly higher among Trump supporters.

While the study found that a majority of Americans would prefer to de-escalate against North Korea if given the choice, a jarring number of them would be willing to use nuclear weapons at the drop of a hat, and believe it's possible to do so at relatively little risk to Americans.

"As we have previously found, the US public exhibits only limited aversion to nuclear weapons use and a shocking willingness to support the killing of enemy civilians," write the report's authors.

"As we have previously found, the U.S. public exhibits only limited aversion to nuclear weapons use and a shocking willingness to support the killing of enemy civilians." https://t.co/B5ufHNmFyX

And really, why would we expect anything else? After all, Americans are taught the lie since they are children that their nation, the only nation ever to use nuclear weapons, did so with the goal of bringing a quick and painless end to a horrible world war. Like so much else, this ultimately boils down to the effects of propaganda.