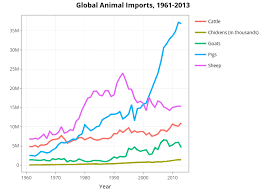 (Natural News) More than 96 percent of all animals killed in the United States are used for food. Most of those animals are shot up with hormones and antibiotics while suffering from consuming only genetically modified "feed." The meat, egg and dairy industries are infested with antibiotic-resistant bacteria and genetically modified virus strains that have no anecdotal mainstream medicine or vaccine, and it's getting worse every year.

From chain stores to fast food joints and on down to cheap supermarket butchers, the animals carcasses are bleached, smoked, and treated with ammonia to kill the sickness, and then comes the added flavor, including MSG, nitrates and artificial dyes.

According to the USDA's National Agriculture Statistics Survey (NASS), the mass genocide of animals in this country is due to the American penchant for … wait for it… chicken. And that's to the tune of 9 billion chickens every year, at least a billion of which die from stress-induced disease or injury before they even make it to slaughter. Let that sink in for a minute.

Remember, you "are" what you eat. Are you eating salmonella and E. coli? Is there pus in your milk from infected udders? Watch for those food recalls that happen more and more often now. Keep reading.

Yes, Americans eat 10 billion animals per year (and that stat is actually a decade old). Including fish, most Americans will chew up and suck down nearly 3,000 animals in their most likely shortened lifespan (about 75 years young, if they're lucky). What's your poison? Bacon cheese burgers? Hot dogs wrapped in bacon? We already know your staple food is chicken, just take a look at the slaughter stats.