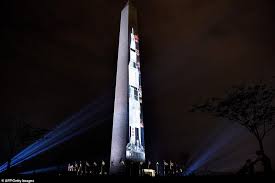 The 50th anniversary of the Apollo 11 moon landings has been celebrated with a projection of the mighty Saturn V rocket onto the Washington monument.

Images of the 363-foot-high (111-metre) rocket that carried the three astronauts to the Moon were beamed onto the side of the obelisk on Tuesday night.

Other events were held to mark it, with veteran astronauts speaking at a conference near the Kennedy Space Center in Florida and a dinner at in Kansdas City, Missouri, where the rocket was built.

The mission blasted off from Cape Canaveral in Florida on July 16 1969.

Mission commander Neil Armstrong and Buzz Aldrin touched down on the Moon four days later on July 20 1969, while Michael Collins remained in orbit.

Fifty years after a mighty rocket set off from Florida carrying the first humans to the Moon, a veteran of the Apollo 11 crew returned to its fabled launch pad Tuesday to commemorate 'one giant leap' that became a defining moment in human history.