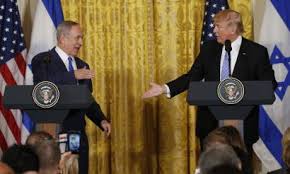 Could he have been wrong?

President Donald Trump has declared several times that his method of government was enough to solve many different conflicts, and that he even hoped, during the course of his mandate (or mandates), to attain peace between the Palestinians and the Israëlis.

According to the international press, Donald Trump has evolved, for US electoral reasons. Although he once seemed little interested by religious questions, he has apparently moved closer to the Christian Zionists and is now under the influence of his vice-President, the Evangelical Christian Mike Pence, and one of his sponsors, the Jewish casino-operator Sheldon Adelson.

President Trump's decisions to move the US embassy from Tel-Aviv to Jerusalem, to interrupt the financing of the United Nations Relief and Works Agency for Palestine Refugees in the Near East (UNRWA), and then to recognise Israëli sovereignty over the occupied Syrian Golan, have been interpreted as confirming his pro-Israëli bias.