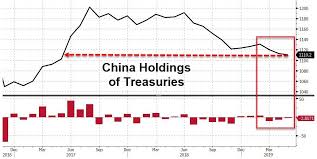 The latest TIC data for the month of May, released just after the close, showed that China continued to sell US Treasurys for the third straight month, bringing its total to just $1.11 trillion, down another $3 billion, and the lowest since May 2017...

Meanwhile, in a surprising development, the UK - which has been aggressively buying US paper either for itself, or in proxy for other purchasers - saw its holdings jump once again, rising to $323.1 billion, an increase of $22.3 billion in the month.

Similar to Belgium and Euroclear, it is far more likely that this surge is simply the result of some offshore fund serving a sovereign, but based in the UK, is doing the buying. Whether it's China or someone else, will be revealed in due course.

Yet despite the occasional purchaser, foreign official institutions (central banks, reserve managers, sov wealth funds) have seen their holdings of US TSYs slide by another $22 billion, the 9th consecutive drop in the holdings of foreign official institutions, and yet because the decline this May was smaller than the drop in May of 2018, the LTM net sales posted a modest drop.