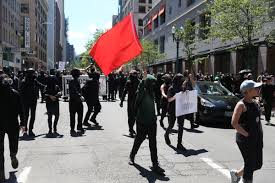 Senators Ted Cruz and Bill Cassidy have introduced a resolution calling for Antifa to be designated a "domestic terrorist organization".

"Antifa is a terrorist organization composed of hateful, intolerant radicals who pursue their extreme agenda through aggressive violence. Time and time again their actions have demonstrated that their central purpose is to inflict harm on those who oppose their views," tweeted Cruz after introducing the resolution.

The text of the resolution asserts that there is no place for politically-driven violence in civil society "because the United States is a place where there is a diversity of ideas and opinions".

The resolution arrives after Antifa attacked journalist Andy Ngo and others in Portland, an assault that left Ngo with a brain hemorrhage.

Last weekend, 69-year-old Willem Van Spronsen also attempted to firebomb an ICE facility in Washington State. He wrote "I am Antifa" in his own manifesto.

This would not be the first time that Antifa has been referred to as a domestic terror outfit in official circles.