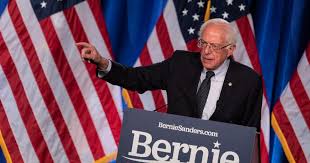 Sen. Bernie Sanders (I–Vt.) is, first and foremost, a politician. As a politician, he is responsible for setting rules that govern how other Americans must live and work.

He's got lots of ideas about that. One of his ideas—one of the more popular ones, considering that a version of it passed the House of Representatives this week—is that workers should be paid no less than $15 an hour, regardless of what agreement they and their employers might have otherwise reached.

But Sanders is also an employer.

As a presidential candidate, Sanders in charge of a national campaign operation that employs dozens of people (along with many more unpaid volunteers). But despite what Sanders believes other employers should have to do to treat their employees fairly, his campaign does not offer a $15 per hour minimum wage.

Some of his employees aren't very happy about that cognitive—and fiscal—dissonance. They intend to send a sternly worded letter to campaign manager Faiz Shakir in the coming days, The Washington Post reports. "Many field staffers are barely managing to survive financially, which is severely impacting our team's productivity and morale," says a leaked copy of the letter. It goes on to say that field workers "cannot be expected to build the largest grassroots organizing program in American history while making poverty wages."