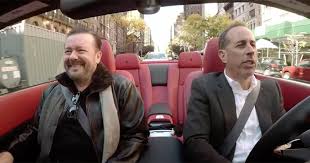 British Comedian Ricky Gervais and his US counterpart Jerry Seinfeld recently discussed the difficultly of being comedians in a society where a swathes of people choose to be permanently offended at anything, and were immediately beseeched by people who were offended by what they said, proving their exact point.

The background of the piece was this debate about whether to leave in a comment made by Seinfeld, which was purposefully supposed to rile up the snowflakes.

"That's one of the best and worst things you've ever said." Gervais commented, knowing exactly what would unfold if it was left in.

The two then discussed the erosion of free speech, in the context of comedy.

"I joke about really terrible things. And I know they're terrible. Of course." he continued, adding "And whenever a new thing comes out that's raw and sensitive, people say, 'You don't understand.' I go, 'No, I do understand.'"