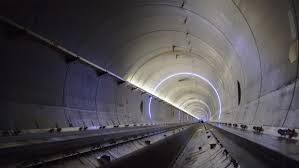 The facility would become the world's longest Hyperloop tube, and would be used to test out the technology as the gulf nation eyes a wider rollout of the futuristic transport system.

A fully-developed hyperloop system would shuttle people and cargo through near-vacuum tubes at close to the speed of sound. Virgin Hyperloop One is just one of the parties tinkering away on this technology, with a 500-meter (1,600-ft) test track already up and running in California where it has propeled its full-scale test pods to speeds of 240 mph (387 km/h).

But at 35 km (21.7 mi) long, the track planned for King Abdullah Economic City to the north of Jeddah would allow much more room to move. In addition to the test track, the facility would also house a research and manufacturing facility, in the hope that it can foster some kind of "Silicon Valley effect" in the region.

"Having hyperloop at King Abdullah Economic City is going to act as a catalyst for a Saudi Silicon Valley effect and galvanize our software development, high technology research, and manufacturing industries," said Secretary General Mohanud A. Helal.