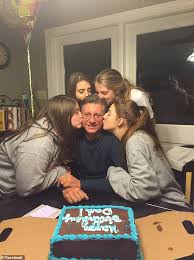 When a Tennessee father and his three daughters became stuck in a riptide at a Florida beach, he made them one last promise: 'I got you'.

Fred Pepperman, 53, died moments after getting his daughters to safety.

Pepperman and his family were visiting the Seacrest and Miramar area beaches on vacation when one of his daughters, Grace, 16, was caught in a riptide on July 14.

His older daughters, Olivia, 20, and Kathryn, 24, went out to help her, but they were swept out to the sea and also needed saving.

Fred Pepperman's wife, Julie, told DailyMail.com on Friday of the close bond between her husband and their daughters.

The mother-of-four said: 'The one thing that helps the girls a little bit is that they know he would have gone in for anybody's child, especially when it came to children.'

Avoid These "Smart" Doorbell Devices Due To Security Vulnerabilities

The Georgia Runoffs And Our Embattled Constitution

The Streetlight Effect: When People Look Within The System For Solutions To The System

The Leftist Obsession With Parler Reveals Their Infatuation With Thought Control