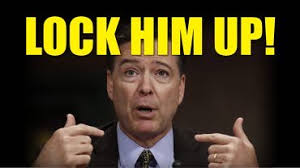 Former FBI Director James Comey leaked numerous notes he had taken while Director of the FBI to the media.  These criminal actions should put him behind bars for years to come.  It's time he's held accountable.

Disgraced and fired dirty cop James Comey leaked his classified memos to numerous individuals in various entities.  He leaked his memos to the following that we know of: [source]

Comey claimed he released his memos in response to a Tweet from President Trump, but Comey's memos were released prior to the date of the tweet [source]

Comey also lied when he said he gave the memo to the New York Times (Via Daniel Richman) on Monday May 15th. We know this because the NYT article came out on the 11th [source]

Comey claims that he did not consider his memos to be government property: "No, and I didn't consider it a part of an FBI file…it was my personal memoir," Comey said of his classified memos [source]

If the Comey memos were not classified information, why were portions redacted? [source]

Former US Attorney General: When Comey Wrote His Notes They Were Classified – Those Were Government Memos [source]

Additionally, his memos were reclassified by the FBI at a later date.

Comey sent his memos to his fellow FBI agents, and he even addressed his fellow agents in his memos.  Did he handle the memos properly at this time?

Likewise, Comey's transmission of memos to his lawyers about classified conversations he had with Trump are troubling. Those forced the government to send "scrub teams" to recover any classified information that may have been transmitted, according to multiple sources briefed on the operation [source]

Comey is in big trouble just for leaking the information he maintained related to his interactions with President Trump.  He lied numerous times outside of this memo scandal.  He also committed crimes in attempting a coup of our US government.

1 Comments in Response to MUST READ: Fired FBI Director James Comey Is Culpable for Numerous Crimes Related to ...

I am sure he has nothing to worry about as long as he keeps his mouth shut about Clintons and Obama roll in this affair. If trump looses in 2020 all will be forgiven. If Trump wins the water is so muddied up that no evidence has been handled in a lawful manner and will have to be tossed out or cause a reasonable doubt in the hand picked jury and judges in his trial.