> It's now obvious: The taxpayers of Illinois will have their - Freedoms Phoenix 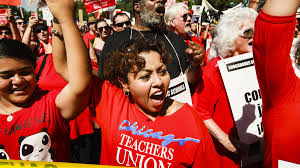 (Natural News) A month ago, Chicago Mayor Lori Lightfoot insisted that the city's pension funds were facing bankruptcy and demanded an urgent multi-billion-dollar bailout from the state. Governor J.B. Pritzker disagreed and denied her request, making it safe to assume that the funds continue to face the same serious problems.

It came as something of a shock, therefore, when just three weeks later, Mayor Lightfoot offered the Chicago Teachers' Union 14 percent pay increases over the next five years – increases which will cost Chicago's taxpayers a whopping extra $325 million, and ultimately place even more stress on the city's pension funds. (Related: If Chicago can't even fund its pensions, how is it going to fund "universal basic incomes" for the masses?)

Why are overpaid teachers being offered even more money?

As reported by Zero Hedge, there are several really good reasons besides Chicago's lack of funds that the city's teachers should not be receiving such steep increases.

For one thing, Chicago's teachers are already the highest paid in the country when compared to similar districts. According to the National Center on Teacher Quality, a teacher in Chicago who holds a master's degree and has a decade of teaching experience, currently earns $80,000 a year, while a teacher with similar credentials would only make $70,000 a year in New York or $60,000 in Los Angeles.

One of the major reasons for this disparity is the speed at which the salaries of teachers in Chicago increase. Teachers there start out earning $50,000 a year, but by the time they have 14 years of experience, their salaries have grown by more than 65 percent to $85,000 a year.

Then there's the fact that a teacher in Chicago will receive over $2 million in pension benefits – far more than the average person in the state could ever dream of accumulating at retirement age.

Even more galling for taxpayers is the fact that since 1981, the Chicago public school system has paid 7 percent of the 9 percent that teachers are supposed to personally contribute to their pension funds.

And, while the Chicago school system has experienced a steady decline in enrollment in recent years, the city is spending more on teachers than ever before. (Related: Chicago schools become overcrowded disease factories feeding children rotten food as district runs out of money.)

1 Comments in Response to It's now obvious: The taxpayers of Illinois will have their incomes confiscated to fund...

The democrats Know which unions will vote for them. Just think of the children will be the rallying cry. Of course most will be dumb as a rock but hay...The teachers are paid well!