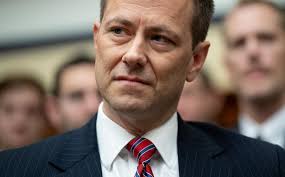 In a suit filed Tuesday, Strzok claims that the FBI caved to "unrelenting pressure" from President Trump when he was fired, according to the Associated Press.

The suit from Peter Strzok also alleges he was unfairly punished for expressing his political opinions, and that the Justice Department violated his privacy when it shared hundreds of his text messages with reporters. -Associated Press

"The campaign to publicly vilify Special Agent Strzok contributed to the FBI's ultimate decision to unlawfully terminate him," reads the lawsuit. "as well as to frequent incidents of public and online harassment and threats of violence to Strzok and his family that began when the texts were first disclosed to the media and continue to this day."

Strzok's lawsuit accuses the government of violating his First and Fifth Amendment rights by firing him over the text messages, and then depriving him of due process to challenge his ouster. Moreover, Strzok says that the DOJ's decision to transmit the incendiary messages to reporters before Congress had a chance to see them was "deliberate and unlawful," and a violation of the Privacy Act.