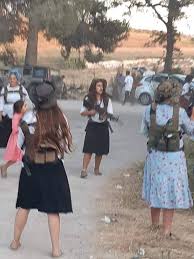 Palestinian Authority official Ghassan Daghlas said dozens of Jewish settlers stormed the occupied town of al-Masoudiya on Monday evening and conducted military training under the protection of the Israeli army.

The majority of the settlers who occupied the area were armed young men and women.

Israel has occupied the West Bank since 1967. More than 600,000 Israeli Jews live in settlements in the occupied West Bank and East Jerusalem, in a bid to illegally annex the Palestinian territory.

Carrying heavy guns is not terrorism when it comes to Israeli settlers.
It would be breaking news in international media if these weapons were carried out by Palestinians.
But it is ok with israeli settlers who are targeting Palestinian chiildren, women and elders#IsraeliCrimes pic.twitter.com/U0MP7IgHwz

All Jewish settlements across the occupied West Bank are classed as illegal under international law, with Article 49 of the Fourth Geneva Convention stating that "the occupying power shall not deport or transfer parts of its own civilian population into the territory it occupies".