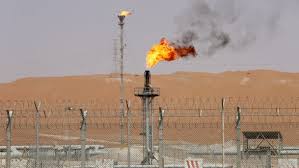 Drones launched by Yemen's Houthi rebels attacked a massive oil and gas field deep inside Saudi Arabia's sprawling desert on Saturday, causing what the kingdom described as a "limited fire" in the second such recent attack on its crucial energy industry.

The Saudi acknowledgement of the attack came hours after Yahia Sarie, a military spokesman for the Houthis, issued a video statement claiming the rebels launched 10 bomb-laden drones targeting the field in their "biggest-ever" operation. He threatened more attacks would be coming.

Today's attack is a check mate move against the Saudis. Shaybah is some 1,200 kilometers (750 miles) from Houthi-controlled territory. There are many more important economic targets within that range:

The field's distance from rebel-held territory in Yemen demonstrates the range of the Houthis' drones. U.N. investigators say the Houthis' new UAV-X drone, found in recent months during the Saudi-led coalition's war in Yemen, likely has a range of up to 1,500 kilometers (930 miles). That puts Saudi oil fields, an under-construction Emirati nuclear power plant and Dubai's busy international airport within their range.