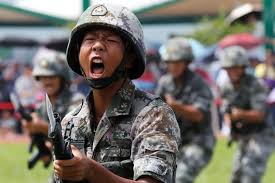 The wide-bodied jumbo aircraft would drop down into a long fjord that was usually shrouded in fog or mist.  The nervous passenger would see nothing but cloud.  Suddenly, the aircraft would break out of the thick cloud cover right over the airport.

To the left and right were apartment buildings festooned with drying laundry at the same height as one's plane.  The big 747 airliner landed with a huge thud and screaming tires right in front of another bunch of apartment buildings.

Even for veteran air travelers like myself, this was a heart-stopping experience.  Amazingly, I recall only one crash at Kai Tak, which we used to call 'Suicide Airport.'  Still, it was like landing a jumbo-jet on New York's Park Avenue.  Not for the faint of heart.

In 1998, Kai Tak was closed and replaced by the modern, spacious Chek Lap Kok, better known as Hong Kong International.  It quickly became one of Asia's principal aviation hubs.