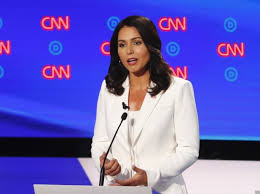 This heightened level of attention produced blowback, both from Harris, who dismissed Gabbard as "an Assad apologist" (a reference to Syrian President Bashar Assad), and from the mainstream media, typified by CNN's Chris Cuomo, who alleged that Gabbard—a major in the Hawaiian National Guard, with two tours of duty in the Middle East under her belt—is taking the side of Assad over the U.S. intelligence community and U.N. inspectors when it comes to assigning blame for chemical weapons attacks against Syrian civilians.

"What you are referring to are [sic] cynicism as skepticism that I have expressed, because I've served in a war that was caused by people who lied to us, who lied to the American people, who presented false evidence that members of Congress and U.S. senators believed and voted for a war that resulted in the loss of lives of over 4,000 of my brothers and sisters in uniform," Gabbard replied to Cuomo. "It's our responsibility as lawmakers and as leaders in this country to make sure that our U.S. military is not being activated and deployed to go to war unless we are certain a) that it serves the best interests of the American people; and b) that that action will actually have a positive impact. The questions I'm raising are based on this experience that I've had."

As someone who challenged the position of the U.S. government regarding Iraq's weapons of mass destruction programs before the 2003 invasion and occupation of Iraq, I believe that Gabbard's skepticism over allegations that the Assad government used chemical weapons to attack the towns of Khan Shaykhun in 2017 and Douma in 2018 is well placed.