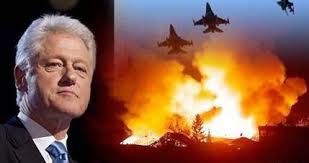 As British professor Philip Hammond recently noted, the 78-day bombing campaign "was not a purely military operation: NATO also destroyed what it called 'dual-use' targets, such as factories, city bridges, and even the main television building in downtown Belgrade, in an attempt to terrorise the country into surrender."

Clinton remains a hero in Kosovo, and there is an 11-foot statue of him standing in the capitol, Pristina, on Bill Clinton Boulevard. A commentator in the United Kingdom's Guardian newspaper noted that the statue showed Clinton "with a left hand raised, a typical gesture of a leader greeting the masses. In his right hand he is holding documents engraved with the date when NATO started the bombardment of Serbia, 24 March 1999." It would have been a more accurate representation if Clinton was shown standing on the corpses of the women, children, and others killed in the U.S. bombing campaign.