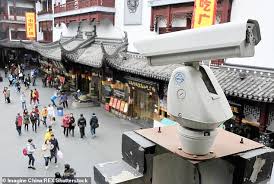 Beijing is on track to have one CCTV camera for nearly every two people as the Communist Party pushes for Big-Brother-style state surveillance.

The country's 1.4 billion population are set to be carefully watched by 626 million street monitors - many having facial-recognition functions - as early as next year, a new study has revealed.

China also has the five most-monitored cities in the world, the report finds. Its most-surveilled city, Chongqing, is equipped with more than 2.5 million street cameras, or one for every six people.

According to the report, the world's five most monitored cities are Chongqing, Shenzhen, Shanghai, Tianjin and Ji'nan in order.

Three other Chinese cities - Wuhan, Guangzhou and Beijing - have made it to the top 10 list published by technology research firm Comparitech.

In Shenzhen, a city with 12 million residents, there is one street camera for every 6.3 people.