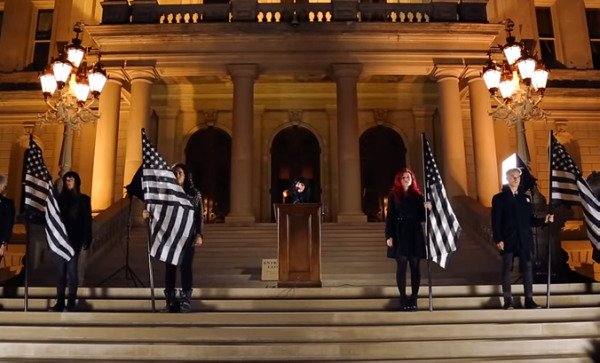 The Satanic Temple will be staging a rally for 'religious' reproductive rights and women's health — and more abortions.

The Satanic Temple believes in the goodness of abortions at any stage of the baby's development.

The satanists will hold the march in one of the following states: Indiana, Missouri, Georgia, Alabama, Mississippi, Arkansas, Kentucky, Louisiana, North Dakota, Ohio, and Utah.

The Satanic Temple (TST) will be staging a rally for religious reproductive rights and women's health at the capital of one of the states with the most egregiously restrictive abortion laws. These states include Indiana, Missouri, Georgia, Alabama, Mississippi, Arkansas, Kentucky, Louisiana, North Dakota, Ohio, and Utah. Supporters will donate in the name of the state of their choice, and the location that has received the most donations will be selected for the rally to take place.

To view the campaign that will determine where The Satanic Temple will rally, visit: https://reproductiverightsrally.com

The fundraiser and rally are being held to support TST's ongoing battle against the erosion of reproductive rights and to address the religious and cultural prejudice rooted in the challenges women face when seeking proper healthcare, including abortion, that affect the bodily autonomy of all, including the LGBTQ+ community. As a religious organization, TST insists that its members are exempt from obstacles to abortion access in accordance with their beliefs under both the First Amendment and the Religious Freedom Restoration Act (RFRA).

TST's religious belief that people should live in accordance with the best scientific knowledge available, and its belief in bodily autonomy, inform their opposition to laws that restrict abortion access. Some of the laws that force TST members to violate their religious beliefs include required provision of reading material with content that does not conform to science and/or that promotes a religious agenda, requiring how human tissue be disposed, mandating unnecessary and unwanted procedures that do not promote health and safety, requiring doctors withhold medical information, and restricting access to abortifacients.

Planned Parenthood, which kills more black people than any other group...

The CRIMINALIZATION of journalism that exposed Planned Parenthood's...

Anti-Abortion Drama 'Unplanned' Is a Runaway Hit with the People, Globohomo Tries Hard to Si

America's baby mayor, a face of the anti-abortion movement