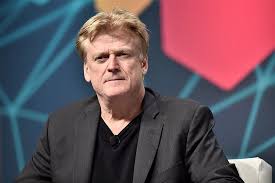 Byrne, who admitted to helping the "men in black" on two previous occasions - a murder case and Wall Street investigations - said that the Obama DOJ was conducting "political espionage" on both Hillary Clinton and Donald Trump, according to Fox News.

Byrne said that all of the purported information he gleaned from his experiences ultimately landed in the hands of Connecticut U.S. Attorney John Durham, who has been conducting an investigation into the origins of the Russia probe at the behest of Attorney General William Barr. -Fox News

The 56-year-old Byrne also told Fox's Martha MacCallum "I was given some fishy orders and I carried them out in 2015-2016, thinking I was conducting law enforcement," adding "I didn't know who sent the orders, but I did them. Last summer, watching television and some congressional hearings, I figured out where these orders came from. They came from a guy named Peter Strzok."

Then, Byrne told CNN that the FBI directed him to pursue a romantic relationship with accused Russian spy Maria Butina.

"Eventually, yes they did," the former Overstock CEO told host Chris Cuomo in response to the question of whether they "told you you needed to have romantic relationship with somebody."