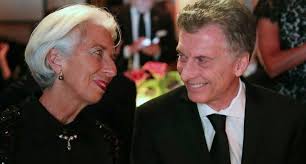 On Friday, when CNBC's Steve Liesman was interviewing the IMF's new chief economist, Gita Kopinath, we suggested that he ask what the IMF's plan is for Argentina now that the country was facing what appears yet another bond default.

And while Steve did in fact ask that question, he didn't get a direct answer for one simple reason: the IMF has no clue what it will do now that it is facing a historic loss on its latest, and biggest ever, $56 billion bailout of Argentina, which was completed less than over a year ago in September 2018.

It gets worse: not only does the IMF have to scramble to preserve its current bailout, and credibility, having sunk billions into a country which humiliated the IMF at the start of the century when it defaulted last, the monetary fund has to decide whether to keep injecting money into a nation that many believe will soon default on its foreign obligations - and the IMF - again, after President Mauricio Macri just got trounced by the populist opposition in a nationwide primary vote, after his IMF-backed program - based around much hated budget austerity and the world's highest interest rates - failed to pull the economy out of recession. What happened next, as we reported two weeks ago,  was a 20% crash in the peso and a collapse in government bonds, which pushed the implied risk of default above 80%.