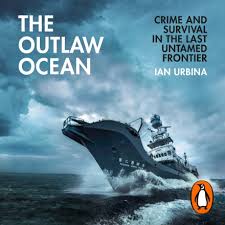 Ian Urbina, an investigative journalist with the New York Times, has spent the better part of the past five years out on the open ocean, what he calls the "last untamed frontier."

In his aptly-titled new book, The Outlaw Ocean, Urbina recounts how he spent time with criminals of every stripe, got battered by extreme storms, and confronted horrifying human rights crises. Given the larger-than-life events he faced, it's no wonder that when Urbina talks about the ocean his language is out of this world. The people out there are "otherworldly" and "extraterrestrial;" going out to sea is "space travel on Earth."

In 2014, Urbina began a multi-part series in the Times, chronicling a world in which the laws that protect people and the environment don't hold much water. After two years of telling these stories in print, he realized that he wasn't finished and set out for another stint of reporting, sometimes spending weeks or months at a time at sea. The stories in The Outlaw Ocean reflect all of this time on the water.