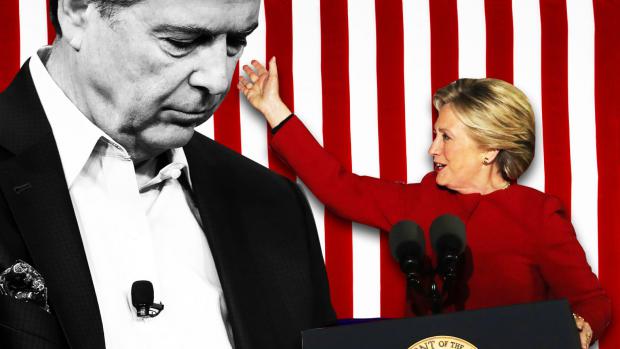 There is no doubt that Jim Comey was part of a conspiracy to destroy Donald Trump and his Presidency. But all the evidence is not yet on the record. There is some understandable frustration reverberating around the web that Comey is not being indicted in the wake of the latest Inspector General report detailing Jim Comey's inappropriate and unethical handling of Government material. But that is not the role of the Inspector General. It is up to DOJ to prosecute and a careful reading of the current report makes clear that there was not adequate foundation to get an indictment and prosecute.

However, if you believe that Jim Comey is getting a pass and will get away with corrupt activity, let me suggest you are overreacting and that patience is warranted. Comey is not out of the woods.

My only previous experience with Bill Barr was the role he played in making sure that the two guys who planted the bomb on Pan Am 103 were prosecuted. Barr was a straight shooter and would not cut corners. I also am friends with a person who worked directly for him during that period. That person insists that Barr is not going to let Comey and Brennan and Clapper off the hook. But that person also has reminded me that Barr will do it by the book and do it fairly.

With that predicate, I want you to focus on the core of today's Inspector General report. It is very simple and concise:

The focus of the OIG's investigation was to determine whether Comey violated Department or FBI policies, or the terms of his FBI Employment Agreement, in his handling of the Memos during and after his tenure as FBI Director.

Memos 2 and 7 contained small amounts of information classified at the "CONFIDENTIAL" level. The FBI designated Memos 4, 5, and 6 as unclassified, "For Official Use Only."

[t]he Inspector General Act of 1978, the OIG provided a copy of [these] factual findings to the Department for a prosecutorial decision regarding Comey's conduct. . . After reviewing the matter, the Department declined prosecution.

As described in this report, we conclude that Comey's retention, handling, and dissemination of certain Memos violated Department and FBI policies, and his FBI Employment Agreement.4

I repeat, Comey violated Department of Justice and FBI policies and violated his FBI Employment Agreement. If he had taken classified memos home and stored them then he would have been indicted. But he did not engage in criminal activity with respect to classified information. He consciously and deliberately took steps to not keep classified information at his house. This is quite different from the conduct of Hillary Clinton, who knowingly and intentionally kept classified information on her unclassified, private server.

1 Comments in Response to Keep Your Powder Dry, Comey Is Not Out of the Woods

after seeing Hillary walk and Holder not even looked at. The FBI head dragging his feet on investigations and other departments on the transparency orders from the president. Add the last AG meeting with the Clintons and special deals and wording from the FBI.I think I am entitled to overreacting on no charges being brought up.