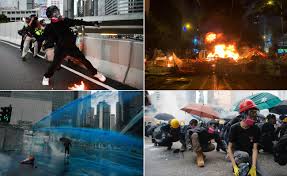 A video on Facebook, meanwhile, appears to show the moment protesters discover an undercover officer firing what appears to be pepper rounds.

Authorties, of course, are calling for calm: "The president calls on protesters to express their calls through peaceful means and hopes all parties can resolve the social conflicts altogether," said a spokesman for Legislative Council president Andrew Leung Kwan-yuen.

Meanwhile, as Bloomberg's Fion Li reports, the riot police is now sweeping across the subway, in an attempt to make mass arrests.

Protesters in Hong Kong returned to the streets in what Bloomberg has called "one of the city's most violent days in its 13th weekend of social unrest," after several top organizers were arrested and then released, including Joshua Wong, Agnes Chow and Andy Chan.