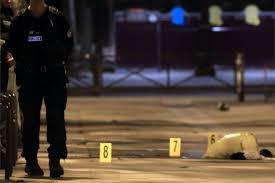 People playing pétanque - a French bowling game - threw metal balls at the attacker, and he was overpowered.

The man, said to be Afghan, was soon arrested. The incident is currently not being treated as a terrorist attack.

Among the victims were two British tourists - police say the two men, in their fifties, suffered serious stab wounds to the chest and stomach.

The knifeman initially stabbed two men and a woman near the MK2 cinema on the Quai de Loire, along the Ourcq canal on Sunday, reports say.

Eyewitness Youssef Najah, 28, said he was walking beside the canal when he saw a man running and holding a knife about 25-30cm (10-11 inches) long.

"There were around 20 people chasing him. They started throwing pétanque balls at him," he said.

1981 Book By The Adviser To The French President Spells Out The Elite Genocide Plan...