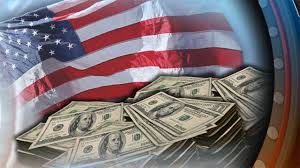 According to a report by Fox Business, Schiff, the CEO of Euro Pacific Capital says that the United States economy is heading into a free fall that will be worse than the Great Recession of 2008. The economic forecaster is predicting the Federal Reserve (the central bank) will cut interest rates to zero and launch quantitative easing, a monetary policy where the central bank purchases Treasuries from financial institutions to stimulate the economy. "The dollar is going to go through the floor and it's going to take the bond market with it and the next crisis, it's not subprime mortgages, it's going to be in the Treasury market," he said on Wednesday. "There's no way out and it's a political disaster for Trump because the recession is going to start before he finishes this term, which means he won't have a second term" Schiff added.

This is not the first time Schiff has warned about Trump's reelection chances.  The president's best hope is that any recession holds off until after the 2020 election.

Schiff has been warning of a recession for a while now, and he has a gloomy outlook for the world's future when it comes to the centralized planning and elimination of free trade and free societies. His warnings appear to be falling on deaf ears, however, as we still have people actually defending the trade war and tariffs which have been levied on the already cash-strapped American consumer.