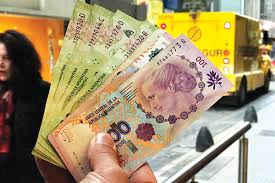 Less than two decades ago, Argentina crashed out of an IMF program, defaulted on debt and plunged into depression. As Fund officials arrived in Buenos Aires over the weekend to assess the country's current $56 billion bailout -- and decide whether to keep doling out cash -- some of the same warning signals are flashing.

President Mauricio Macri just got trounced by the populist opposition in a nationwide primary vote, after his IMF-backed program -- based around budget austerity and the world's highest interest rates -- failed to pull the economy out of recession.

His defeat cued a market rout that was spectacular even by Argentina's standards of volatility. The peso slumped 20% in a week, and yields on government bonds surged -- pushing the implied risk of default above 80%.

The IMF delegates, who arrived in Argentina on Saturday and immediately began meetings with policy makers, face a tricky choice with unwelcome echoes from two decades ago: risk making the turmoil even worse by withholding a $5.3 billion installment due next month -- or cough it up, even though the program's future looks highly uncertain.

AT&T In 'Advanced' Talks To Combine HBO, CNN, Discovery And Other Media Assets