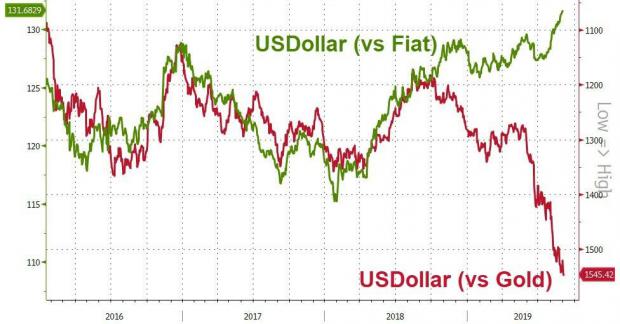 Assorted foreign fiat confetti against the US dollar – we have added the Argentine peso as well, as it demonstrates what can happen when things really get out of hand. [PT]

So, naturally, what is getting play is a story that Bank of England governor Mark Carney said the dollar's influence could decline. This is somewhat ironic, because in true Keynesian fashion, Carney believes in a "savings glut" which he laments has caused "low inflation".

Everyone should be bellowing from the rooftops, not about the greatly exaggerated death of the dollar, but that major currencies are dropping so fast! Analysts should be inquiring why they are falling, while their paradigm encourages them to think that it is the dollar which is, or should be, falling.

We think it is entirely appropriate to measure these currencies by the US dollar, as they are derived from the dollar. And we measure the dollar by gold. Since the recent peak, at 24.51 milligrams of gold at the beginning of May, the dollar has fallen 12% to 20.34mg. It now seems to be within striking distance of its all-time low set in 2011, about 16mg.

TRUTH IS OUT THERE Congress to receive Pentagon UFO report TODAY –

Is a "Climate Lockdown" on Its Way?

What really happened on Capitol Hill on Jan 6?