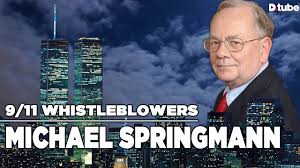 That so many of the 9/11 visas were issued from a single office—the US Consulate in Jeddah, Saudi Arabia—may seem like a minor footnote at first glance, but it is not. In fact, the Jeddah Consulate is not just another US Consular Office. It has a history of issuing visas to terrorists at the request of the CIA. Just ask Michael Springmann. This is his story.

In the days after September 11th, 2001, while the toxic dust was still settling on Lower Manhattan, details began to emerge about the terrorists who had allegedly hijacked the fateful 9/11 flights. Names and pictures were released to the public and broadcast around the world. Ziad Jarrah. Hani Hanjour. Marwan al Shehhi. Mohammad Atta. Even before the official story had begun to coalesce, the foreign faces and unfamiliar names flashing across the screens seared themselves into the consciousness of a traumatized public and left little doubt: This attack was the work of Muslim terrorists.

But at the same time, information began to come out that created problems for this narrative. Reports of these devout Muslim fundamentalists drinking alcohol and partying in strip clubs. Revelations that two of the suspects had been allowed into the US after being identified as Al Qaeda agents. Confirmation that these same agents lived with an FBI asset while in the US. And even the testimony of a senior military intelligence official that a counter-terror program had been specifically warned not to investigate Mohammad Atta in the lead up to 9/11.

WYATT ANDREWS: According to Congressman Kurt Weldon, it was a secret Pentagon intelligence unit code named Able Danger that knew a year before 9/11 that lead hijacker Mohammed Atta was in the United States and connected to Al Qaeda.

CONGRESSMAN KURT WELDON: And as you can see, they identified Mohamed Atta's cell.

ANDREWS: In the summer of 2000, he says, the Pentagon's special ops command had identified two terrorist cells inside the US, and knew of the connection between Atta and three other men who became hijackers. When the agents recommended telling the FBI, Weldon says Clinton administration lawyers said "No," because Atta was in the country legally and could not be targeted by military intelligence.

WELDON: And their recommendation to bring the FBI in, to take that cell out, which was ignored, and they were told you can't do that.

ANDREWS: So a year before 9/11 they had their picture—they had the picture of Mohamed Atta—

ANDREWS: And they knew roughly where he was?

But of the many bizarre pieces of the alleged 9/11 hijacker puzzle, none gets closer to the heart of the mystery than the seemingly innocuous revelation that 14 of the alleged hijackers' visas to enter the United States had been issued at the same office: the US Consulate in Jeddah. That so many of the visas were issued from a single office may seem like a minor footnote at first glance, but it is not. In fact, the Jeddah Consulate is not just another US Consular Office. It has a history of issuing visas to terrorists at the request of the CIA.