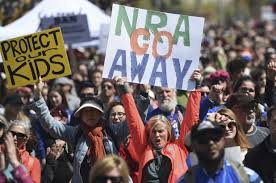 The lawsuit, filed in U.S. District Court for the Northern District of California, accuses city officials of violating the gun lobby's free speech rights for political reasons and says the city is seeking to blacklist anyone associated with the NRA. It asks the court to step in "to instruct elected officials that freedom of speech means you cannot silence or punish those with whom you disagree."

Last week, the San Francisco Board of Supervisors passed a resolution calling the NRA a "domestic terrorist organization," contending the NRA spreads propaganda that seeks to deceive the public about the dangers of gun violence.

The resolution follows some recent high-profile shootings, including one in Gilroy, California, about 80 miles (129 kilometers) southeast of San Francisco, where a gunman entered a festival with an AK-style long gun, killing three people and injuring 17 before killing himself. Since that shooting on July 28, there have been at least three mass shootings — in El Paso, Texas; Dayton, Ohio; and in the West Texas towns of Odessa and Midland.