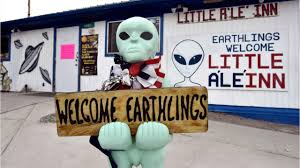 No one knows what to expect, but the two tiny towns of Rachel and Hiko near the once-secret military research site are preparing for an influx of people over the next few days.

"It's happening. We already have people from all over the world," Little A'Le'Inn proprietor Connie West said Wednesday from her bustling cafe and motel, where volunteers have arrived from Poland, Scotland, Australia, Florida, Idaho and Oklahoma.

Neighbors, elected officials and event organizers said the craze sparked by an internet joke inviting people to "see them aliens" might become a cultural marker, a monumental dud or something in between.

Area 51's secrecy has long fueled fascination about extraterrestrial life, UFOs and conspiracy theories, giving rise to the events this week and prompting military warnings not to approach the protected site.

"This phenomenon is really a perfect blend of interest in aliens and the supernatural, government conspiracies, and the desire to know what we don't know," said Michael Ian Borer, a University of Nevada, Las Vegas, sociologist who researches pop culture and paranormal activity.