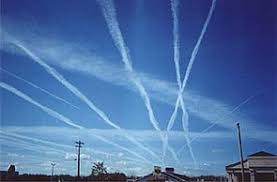 The mainstream media has made a radical departure away from vehement chemtrail denialism into systematic chemtrail embrace, and the question remains as to why the climate "deep state" has suddenly decided to show its cards.

Geoengineering, which was long dubbed a "conspiracy theory" by the narrative gatekeepers, has suddenly become not just a thing, but the thing that will supposedly provide the solution to "climate change" and "global warming." But is this really the true purpose of chemtrails?

Just as Mike Adams, the Health Ranger, long warned, the geoengineering conspiracy would one day be exposed and make its way into the mainstream, but under false pretenses – and that's exactly what appears to be happening.

Geoengineering is real, they're now admitting, and it's for the good of the planet. But the truth is that the chemtrail agenda is a nefarious tool that the "elite" are using as a means of weather control, and thus population control.

While it's somewhat encouraging to see that what we and others have long warned about is, in fact, turning out to be everything we said it was, the revelation of this to the general public suggests that the globalists are much further along in fulfilling their agenda than many people probably think.