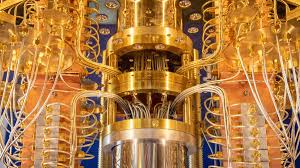 IBM's 14th quantum computer is its most powerful so far, a model with 53 of the qubits that form the fundamental data-processing element at the heart of the system. The system, available online to quantum computing customers in October, is a big step up from the last IBM Q machine with 20 qubits and should help advance the marriage of classical computers with the crazy realm of quantum physics.

Quantum computing remains a highly experimental field, limited by the difficult physics of the ultra-small and by the need to keep the machines refrigerated to within a hair's breadth of absolute zero to keep outside disturbances from ruining any calculations.

But if engineers and scientists can continue the progress, quantum computers could help solve computing problems that are, in practice, impossible on today's classical computers. That includes things like simulating the complexities of real-world molecules used in medical drugs and materials science, optimizing financial investment performance, and delivering packages with a minimum of time and fuel.

Quantum computers rely on qubits to store and process data. Unlike regular computer bits, which can store either a zero or a one, qubits can store a combination of both through a concept called superposition. Another factor is entanglement, which links the states of two qubits even if they're separated.

"The new quantum system is important because it offers a larger lattice and gives users the ability to run even more complex entanglement and connectivity experiments," said Dario Gil, director of IBM Research.

IBM is competing with companies like Google, Microsoft, Honeywell, Rigetti Computing, IonQ, Intel and NTT in the race to make useful quantum computers. Another company, D-Wave, uses a different approach called annealing that's already got some customers, while AT&T and others are pursuing the even more distant realm of quantum networking.