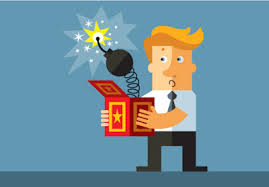 Just like in 2008, most Americans are living right on the edge financially, and so any sort of an economic downturn is going to be extremely painful for tens of millions of American families.  When you have not built up a financial cushion, any sort of a setback can be absolutely disastrous.  During the last recession, millions of Americans suddenly lost their jobs, and because most of them were living paycheck to paycheck a lot of them suddenly couldn't pay their mortgages.  In the end, millions of Americans lost their homes during the "subprime mortgage meltdown", and today the housing bubble is even larger than it was back then.  Sadly, the reality of the matter is that many of us are just barely scraping by from month to month, and that is a very dangerous position to be in.

Among survey respondents in the nationally representative poll, 38 percent said their top financial priority is "just staying current on living expenses or getting caught up on all the bills." Almost 3 in 10 respondents (29 percent) said their chief priority was "saving more money," and 19 percent indicated they were mainly working on paying down debt from products like credit cards and student loans.

So that means that for nearly 60 percent of all Americans, the top financial priority each month is either finding a way to pay the bills or dealing with credit card debt.

And if you are struggling to pay the bills each month or you are drowning in credit card debt, the truth is that you are definitely not ready for the next recession.

More than a decade into the longest economic expansion on record, almost two-fifths of people said in a new Bankrate poll that their main financial priority was just keeping their heads above water on living expenses rather than saving money.

Nearly as many of those surveyed said that they're not following financial budgets, according to Bankrate's September Financial Security Poll.

So many people out there spend money whenever they feel like it and they don't have any sort of a plan for their finances.

And then when they get deep into debt they wonder how that could have possibly happened.

It is so important to take charge of your money and to have a plan for where you want to go financially.  Because if you don't have a plan for your money, I promise you that somebody else does.  As many of us have learned the hard way, it is all too easy to fall victim to all of the financial predators that are constantly circling these days.  The big financial institutions want to get Americans into as much debt as possible, because the deeper we are in debt the more money they make.

In our society, everything has become all about extracting as much money out of you as possible.  Even when we are at the checkout counter at the supermarket we are asked if we want to get some "cash back" so that they can charge us a "convenience fee" and make even more money.  And of course most of the money that is extracted out of us ultimately ends up at the very top of the financial pyramid, and as a result the gap between the "haves" and the "have nots" continues to grow.

In fact, the U.S. Census Bureau is telling us that the gap between the rich and the poor is now "greater than it has ever been"…

In the midst of the longest economic expansion the United States has ever seen, with poverty and unemployment rates at historic lows, the separation between rich and poor from 2017 and 2018 was greater than it has ever been, federal data show.

To be fair, the U.S. Census Bureau has only been measuring this since 1967, and so it is entirely possible that things could have been even worse earlier in our history.

But the numbers do clearly show that the gap has been steadily widening for years, and at this point wealth inequality in the U.S. is far greater than it is in any country in Europe…