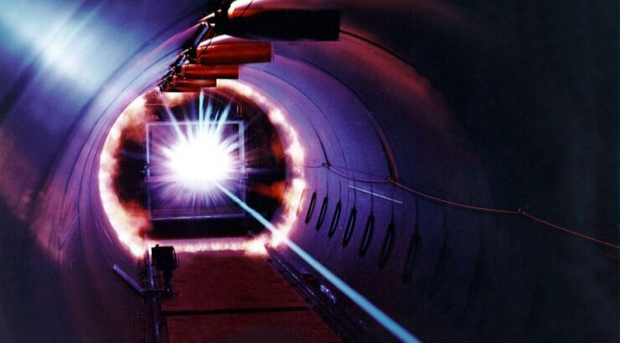 People generally balk at the idea of scientists experimenting with and manipulating certain pillars of physical reality, whether that be gene splicing, artificial intelligence, or nuclear fusion.

But in the last couple of decades, a new twist on this modern Island of Dr. Moreau-style narrative has surfaced in the form of scientists experimenting on high-velocity elementary particles (such as the CERN Hadron Collider) and other quantum enigmas.

Laser physicists recently chortled "hold my beer" in announcing that they are developing a laser so powerful it can shred all matter, including the very electrons and nuclei that constitute the fabric of reality itself.

Earlier this month, the physics journal Physical Review Letters published a paper discussing how new technology could allow a high-velocity laser to pierce "through [the] fabric of the Universe." The trick, according to a researcher at the Université Paris-Saclay, is to anchor and focus the laser using a mirror made of plasma.

In an analysis written for Ars Technica, physicist and writer Chris Lee broke down the logistical hurdles the new technique could overcome. By consolidating a 5-10 petawatt laser for around 5-5000 joules of energy for somewhere between a picosecond or femtosecond, scientists can muster an intensity of 1022W/cm2, which is when a plasma state kicks in and creates a conductive gas of excited particles whose electrons reflect light.