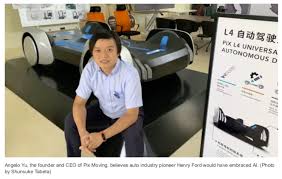 Angelo Yu, the founder of Pix Moving, has outsmarted the most powerful country in the world: the U.S., as A.I. designs vehicles, uploads the blueprints onto the cloud and sends the instructions to 3D printers that can be based anywhere in the world.

"We don't export cars to the U.S.," Yu said. "We export the technique that is needed to produce the cars."

Pix has gained attention from two major automakers, Volvo and Honda motors. Yu told Nikkei that if Henry Ford was still living, he would be using A.I. and 3D printers to produce automobiles.

"If Henry Ford were still alive," Yu said, "I believe he would have also built cars using A.I."

Yu's startup could be the solution for Chinese manufacturers to bypass President Trump's tariffs.

To reduce the number of parts needed to make an automobile, Yu and his team turned to an A.I. technique known as generative design, which is a program that entirely uses A.I. to design the vehicle with some human inputs such as car size and maximum weight. Many other inputs could go into the design, but from there, Yu said the computer does all the work.