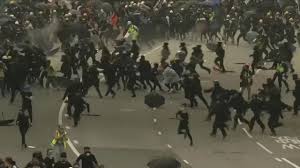 Violence continued in Hong Kong as anti-government demonstrations entered their 17th week. The police response was described by the Washington Post as "among the most aggressive" since the movement began over a now-withdrawn extradition bill which would have allowed China to forcibly move suspects to the mainland for face trial in communist courts.

Protesters destroyed signs and flags raised in advance of the 70th anniversary celebrations of the founding of the People's Republic of China, some of which were burned. According to WaPo, "At times, riot police appeared outnumbered. Shoppers at a luxury mall in central Hong Kong looked on as police and protesters engaged in a pitched battle. Protesters crouched, created a phalanx of umbrellas and tossed bricks and bottles toward the officers. Police fired round after round of tear gas."

The protesters inched forward as rubber bullets shredded their umbrellas. When it appeared the police might be outflanked, officers made a hasty retreat. Protesters seized the moment, rushing toward officers piling into police vans.

Demonstrators, cheered by onlookers and fellow marchers, hit the vans with poles and bottles as the vehicles sped away. The road was littered with glass and spent tear-gas canisters clinked across the asphalt as the protesters continued their march.