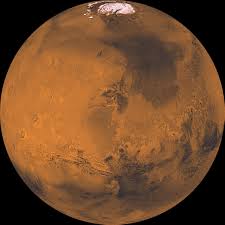 In fact, scientists are now at the stage of devising ways to make a Mars colony self-sufficient. According to one recent study, this self-sufficiency will depend on insects and high-calorie crops grown in tunnels.

Food, it appears, will be the biggest challenge, according to planetary scientist Kevin Cannon, who spoke to Space.com about the work he and his colleagues from the University of Central Florida are doing on Mars colonization.

The idea of colonizing Mars centers around making this colony self-sufficient rather than reliant on imports. While energy can be sourced locally—using solar installations and nuclear reactors, apparently—food would be more difficult to grow locally. Luckily for the future Mars settlers, technology has advanced sufficiently to make lab-grown meat one possibility. Not so luckily, insects will also have to be part of the menu.

"Bugs are the way to go, if people can get over the gross factor," Cannon told Space.com. Insects, according to the researchers, offer a very attractive ratio between the amount of calories they can offer and the amount of water and food they need.