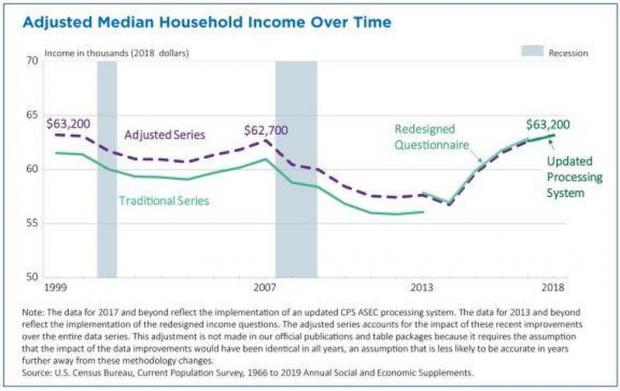 Median household income was $63,179 in 2018, an uptick of 0.9% that census officials said isn't statistically significant from the prior year based on figures adjusted for inflation.

The new figures showed that the number of full-time, year-round workers increased by 2.3 million. When looked at by race and ethnicity, median household incomes in America were essentially flat in 2018 for all groups except Asians, who saw theirs rise 4.6% from the previous year in real dollars.

The good news is that while income were flat, the poverty rate in 2018 decline modestly to 11.8%, a decrease of a half percentage point from 2017, marking the fourth consecutive annual decline in the national poverty rate. It was the first time the official poverty rate fell significantly below its level at the start of the recession in 2007.

The bad news is that as with all other government data, how one interprets the data matters, and as the Census Bureau explained,  in recent weeks, the government revised downward its estimates for job gains, economic output and corporate profits at various points in time since early last year. Previous government surveys had suggested income growth picked up last year. Without dwelling on the nuances, the result is that without the adjustment, income in 2018 is significantly higher than all years shown prior to 2017. However, with the adjustment, it is higher than all the pre-2017 years except 2007, 2000 and 1999.